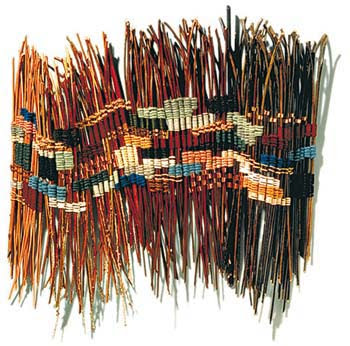 I was able to visit dozens (and DOZENS) of galleries in Washington and Oregon and several artists really inspired me. I especially enjoyed Kathleen Otley's work which was displayed in many locations. She uses organic materials such as reeds, willow branches and feathers with gloriously textured fibres to make her beautiful wall pieces. She hand-dyes many of her materials for gorgeous spectral colour runs... imagine a skinner blend effect with willow twigs!
With her permission I'm posting some of her images here and I urge you to visit her website! http://www.otleyart.com/ Thanks Kathleen!

Posted by Gera Scott Chandler at Friday, August 29, 2008 No comments:

Back Home from a trip to the USA

I'm back! We spent two and a half wonderful weeks travelling through Washington State and Oregon.

We started the trip by ferrying from Sidney BC to Anacortes, WA. We stayed in LaConner at the lovely Queen of the Valley Inn http://www.queenofthevalleyinn.com/ ....here's Gen on the porch. Breakfasts at The Queen are out of this world and the hammock under the oak tree is one of Pacific Northwest's "Best Places" . 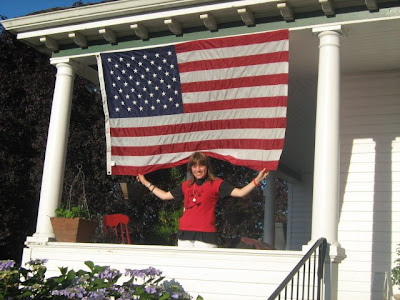 LaConner has some terrific galleries- my favourite was Earthenworks Gallery it was a treat to see a Laura Balombini piece there! http://www.earthenworksgallery.com/ Two Moons Gallery is also a delight. http://www.twomoonsgallery.com/ ... I'm still lusting over a certain coat I saw there.

We headed south to the Long Beach Penninsula- Long Beach is a kitch-ey beach town and after visiting the over the top Marsh's Museum with "Jake the Alligator Man" we had fun strolling along the misty beach. The beach is open to vehicle traffic which made a morning run in the fog a risky venture. As I ran down the beach I kept thinking that being mowed down by an SUV doing 35 mph in the fog on the beach would be a bizarre way to come to an end.

We stayed for a week in Rockaway Beach in the Cannon Beach/ Tillamook area of the Oregon Coast. Perfect beach house, perfectly mixed weather (storms and sunshine), the perfect beach for running and I even had a shopaholic's fix at the factory outlet in Lincoln City! 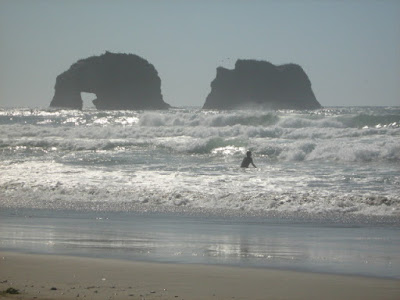 Cannon Beach is a fantastic town for gallery hopping... my favourite galleries there are Dragonfire http://www.dragonfirestudio.com/ and The White Bird. http://www.pacifier.com/~evelyng/ .

One of the highlights of the vacation for me was a horseback ride we had along the beach to Haystack Rock- I had an apaloosa called Navajo- riding along the beach has been a dream of mine and it was unforgettable. I'm still planning to do something horse-y in clay... it's been on the to do list for many years. Here we all are looking a bit like the Cartwright family before David Canary left for Pine Valley. *anyone who understands that is a soul mate ;-) and must make a comment! 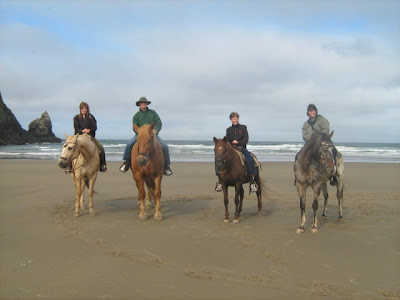 After the Oregon coast we headed north towards home but stopped for a while up in northern Washington in the Sequim area. Port Townsend is another gallery hotspot- Earthenworks is there and there was another Laura B piece to enjoy! I was also really impressed with work in Gallery 9 http://www.gallery-9.com/Artists-Art.html As a tile maker and lover of ravens I like Sara Fitch's work- http://www.rollingravenstudio.com/ I treated myself to one of her raven tiles!

Through the trip we watched the Olympics and it was the only time I was homesick for Canadian television which is odd as good friends know I'm a CNN junkie. I'm afraid NBC's Olympic coverage is not as good as the Canadian Broadcasting Corporation - someone needs to inform NBC that "LIVE" on the screen does not mean live 3 hours ago (do they think west coasters don't have access to the internet?) and that there are other countries in the Olympics besides the USA- Washingtonians had CBC on in the pubs and told us that they enjoy seeing coverage that includes the victories of other countries and the accompanying variety of events. I like watching athletes from other countries stand on the podium and hearing their anthems... maybe it's because Canada doesn't sweep dozens of medals that lets our network present a wider range of events. I hope CTV, the Canadian network that will cover the 2010 Winter Olympic from Vancouver and Whistler will model the classy coverage on the CBC and not the jingoistic & time confused NBC.

Enough grumpiness- we LOVED watching the Democratic Convention! We also had fun listening to political talk radio- my 16 year old son was in hysterics listening to the conservatives- he has a Canadian's sense of humour and thought they were being satiric.

More tomorrow...I'll blog about some of the artists who have inspired me and some ideas I want to work on.....

The Bowker Creek Brush Up 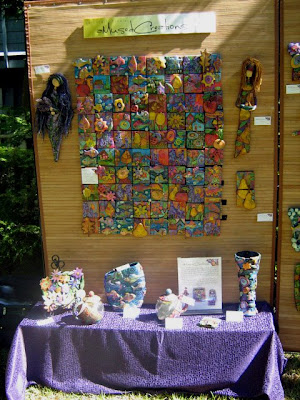 As always, the Bowker Creek Brush Up was a great success- big crowds- great conversations and wonderful art! I'll be blogging about some of the people I met at the show in upcoming weeks.
Here are some photos of my booth... the pictures were taken in a rush - it was a very busy day! 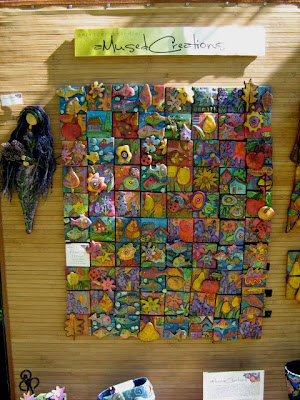 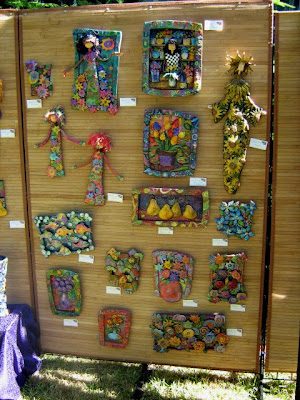 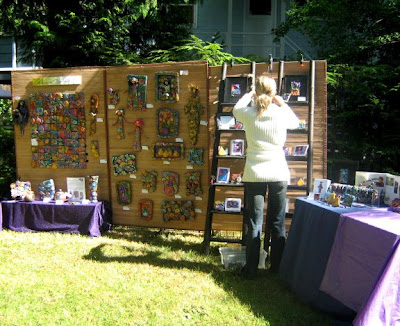 Posted by Gera Scott Chandler at Tuesday, August 12, 2008 No comments:

Polymer Clay at the Bowker Creek Brush Up

On Sunday August 10 I'll be displaying and demonstrating my polymer clay work at the Bowker Creek Brush Up in Oak Bay ... it's an event with a happy atmosphere in a park setting with a lovely stream, bridge and meandering pathways. There'll be 34 artists and artisans offering work for sale and demonstrating their techniques.
The Friends of Bowker Creek will also be in attendance with information about Bowker Creek- http://bowkercreek.org/
Look for me in booth 11! 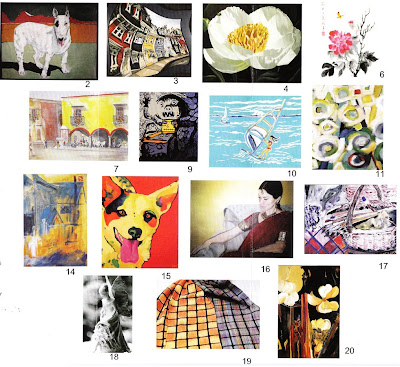 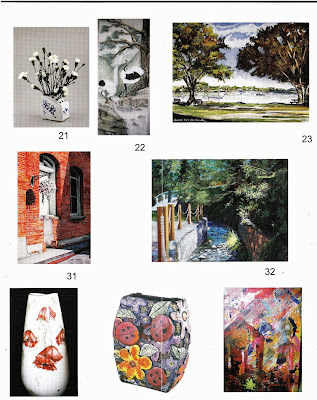 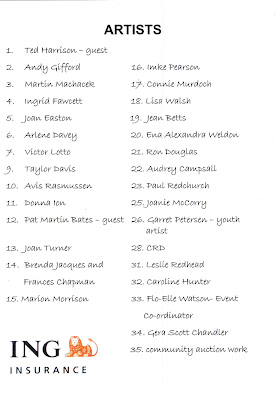